What Length Barbell Do I Need?

Here’s how you determine what length of barbell you need.

First, the common lengths of barbells

Typical length of shaft and sleeves of 7ft olympic barbell

A 7 foot barbell is usually around 51-52″ long between the shoulders / inside collars. Each of the sleeves is about 16″. Add another couple inches for the shoulders (the thick parts that stop the weights you slide on) and you have about 86″ or 7ft.

This is generally the length of barbell you should get to do most barbell exercises in a gym, including squats, deadlifts, and bench presses. Even landmine exercises work best with a 7ft barbell, including landmine twists, rows, and presses, although shorter athletes do fine with a 6ft long barbell too.

For a bench press rack 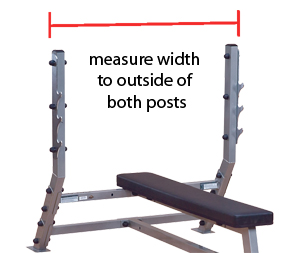 First, if you already have a bench with attached barbell holders like in the image on the right in your gym, measure it. What you want to measure is the outside width of the rack. Be sure to measure from the outside of one side to the outside of the other, not just the inside distance. This will tell you what size barbell you need.

The reason for this is the shoulders of the barbell (that you slide weight plates up against) needs to be farther apart than this measurement, so that the collars are sitting on the outside of both posts. This makes it so there is no interference when you rack the barbell and when you load and unload weight plates. So the full space between the posts is therefore available to you to grip, depending on your preference of grip width.

As of writing, all of our weight benches are olympic width. What this means is the above measurement is going to be about 48″ wide on all of them. To fit it, you generally need a 7ft barbell. A 7ft barbell will always be long enough that collars will sit outside the rack. To be specific, you will have about 51-52″ of shaft on the barbell, leaving a couple inches of slop in either direction so that you don’t have to worry about racking it perfectly in the center. Two inches of slop is just right. But less than an inch requires a lot of precision can can result in some nasty mishaps. You certainly don’t want to have trouble racking the barbell after a heavy set where you barely completed the last rep of bench presses and need to rack the barbell quickly. 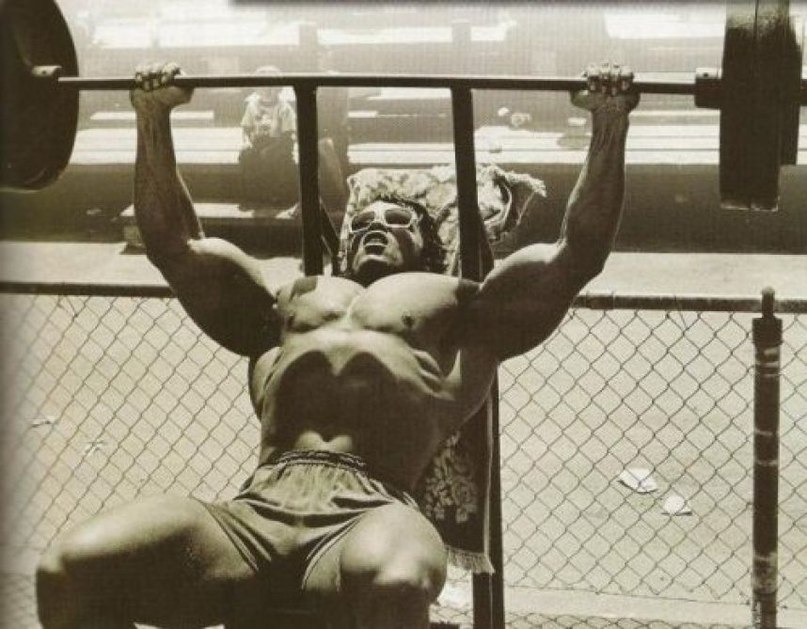 A very narrow bench press rack used at Muscle Beach back in the day. These are not used anymore.

Back in the day, bench press units were made like the above, where the barbell holders were so narrow you would grip the barbell outside the holders instead of between them. Any serious units today are not narrow like that. You can still find narrow ones like this, but they are the cheap variety in sporting goods stores that you should not be buying.

For a power rack or squat rack 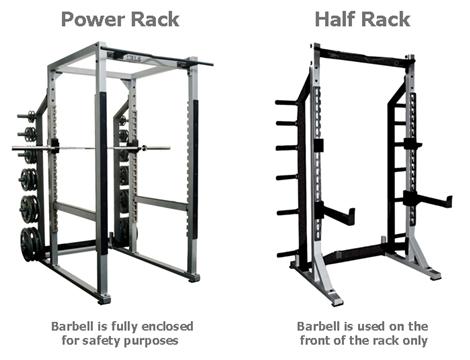 Virtually all power racks and squat racks (half racks) made in the last 20 years are olympic width to fit a 7ft barbell, or about 48″ (4ft). There’s almost no need to measure it.

The key for most setups is to make sure the barbell has at least a 51″ shaft between the inside collars. That way you can be sure it will fit on any power rack. 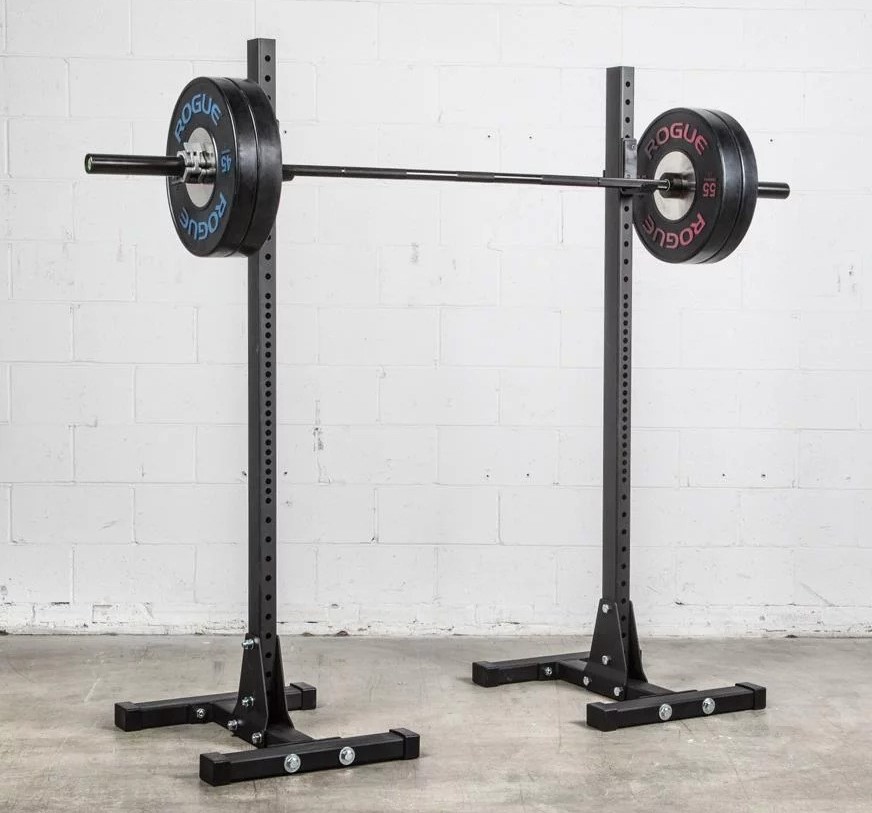 Independent squat stands are 2-piece semi-portable designs that you adjust to whatever distance apart you want. They are a different matter. The best way to use these is set them to olympic width just like a squat rack and use a 7ft barbell. You’ll have to measure the distance and put markers on the floor.

However, you can set these to any distance apart you want. Be careful that they don’t get in the way of your feet if you’re squatting off them. As you can see in the pic above, they can get in the way pretty easily, even at olympic width apart. 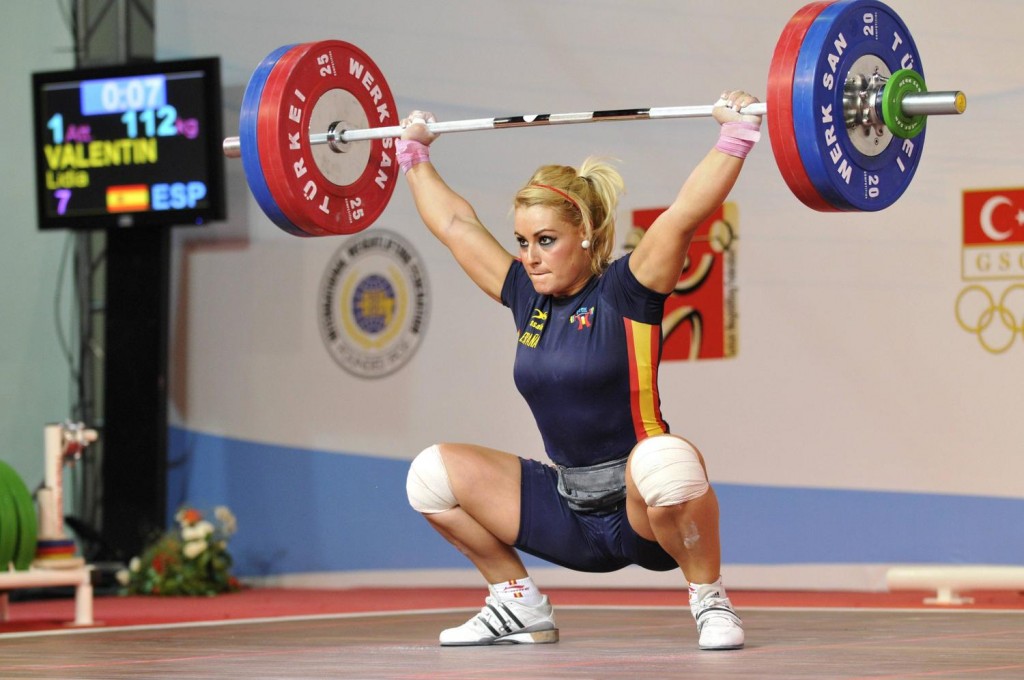 Olympic weightlifting is a different thing than “olympic width” racks. Olympic lifting refers to the snatch and the clean-and-jerk, both done by lifting off the floor and not a rack.

The size of men’s olympic lifting barbells is about 7ft, just like most barbells.

Women’s olympic lifting barbells are sized shorter, around 6ft to 6.5ft. The grip length of the shaft is exactly the same as a men’s barbell, 51-52″. They make the sleeves up to 6″ shorter, or about 12″ long each, so you won’t be able to fit as much weight on them. Normally that’s still plenty of space on the sleeves.

The weight of a women’s bar ends up being less, due to the length and the fact that the shaft is a bit thinner as well.

Other 6ft and 5ft “shortie” barbells

Other lengths of barbells that are not women’s barbells are 5ft or 6ft long for no other reason than they are cheap accessory barbells. They aren’t meant for heavy lifting, just things like curls and other light work you can do by picking it up off the floor, without the need for a a rack. These don’t have the same 52″ inside grip length as 7ft barbells and 6ft women’s barbells and will not fit on a power rack. The grip length might only be 40″ or so.

There are some exceptions. “Rackable” 6ft barbells will fit on a power rack because they are made similarly to women’s barbells but with a larger shaft diameter such as 28mm or 30mm, instead of the women’s diameter of 25mm for their smaller hands.

I’ve excluded standard barbells from this article, because they’re generally just used in cheap home gym setups or for lightweight (5-40 lbs) barbell group training classes. Like olympic barbells, the length of a standard barbell is anywhere from 5ft to 7ft.