How Accurate are Gym Weights?

So how accurate in weight are all those freeweights and machines you use at the gym?

Let’s examine all the different types… 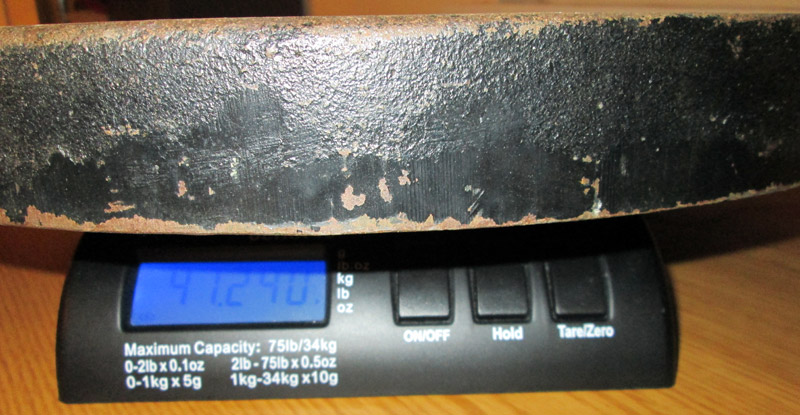 An owner of a set of old Hampton plates weighed his whole set and found the majority to be within 2% of the marked weight, some within 4%, and a few outliers beyond 5%. The biggest inaccuracies, percentage-wise, were the smaller plates, so as far as pounds they were about a pound off.

He also meticulously weighed some CAP plates, CAP plates with grip holes, Golds Gym plates, and others. The results, for all brands, is that most plates are within 5% of the marked weight, above or below.

You’ll find 5% to be typical across most brands. That’s what Troy Barbell tells us about their cheaper plates without the Troy or VTX logo, that they are generally within 5% but not guaranteed.

A HardGainer writer shares his experience with inaccurate weights: “Prior to weighing my plates, I was usually, but unknowingly, lifting a different weight each week even when I thought I had the same poundage on the bar for those weeks.” 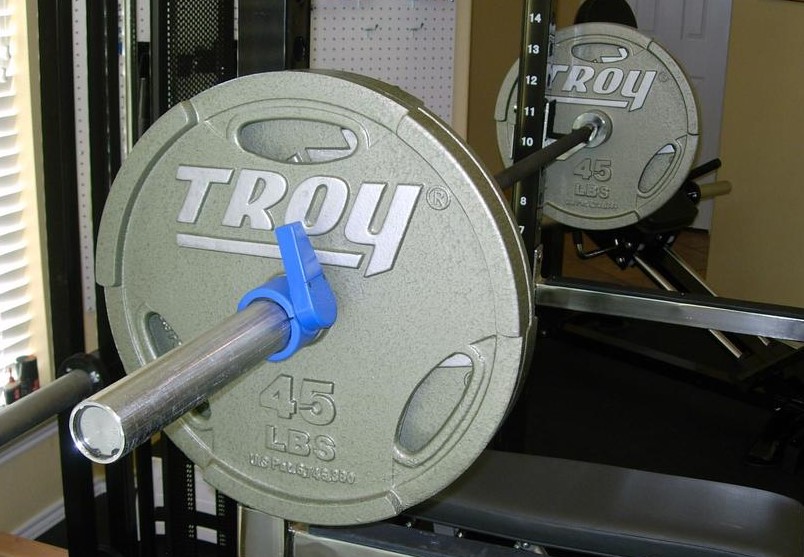 You can get better than 5%. Troy Barbell guarantees that the weight plates with the Troy logo on them are all within 2%. That’s pretty good! You only pay a little more for that, and it’s why we’ve sold so many of the Troy premium plates.

Starting at 4:35 in the above video, Alan Thrall shows the new Troy plates he got from us, and how accurate they are. These Troy ‘PO’ model plates are easily the most popular we sell. 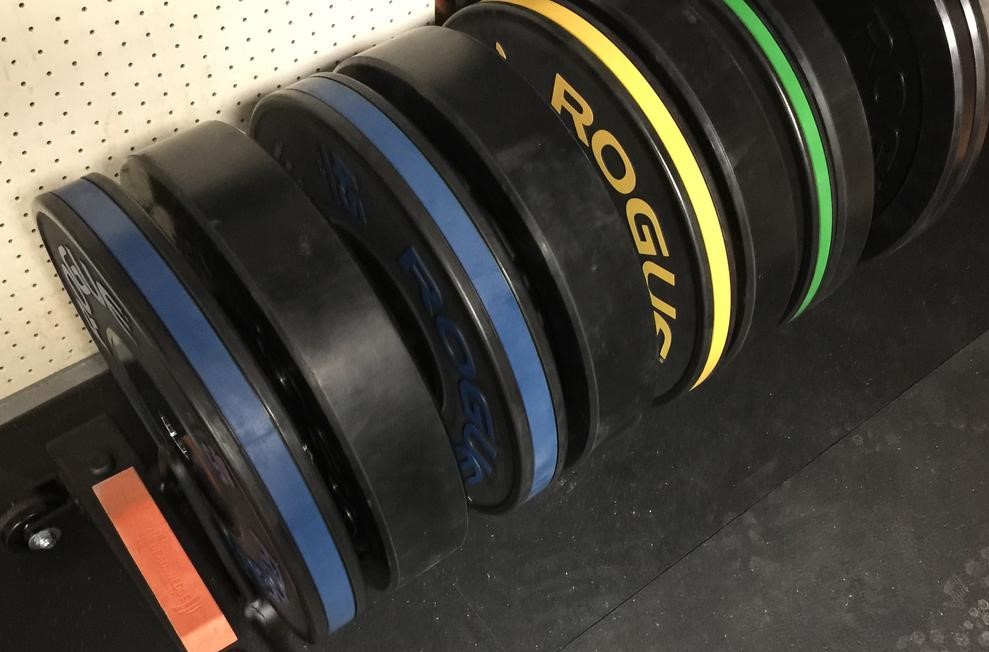 Here we’re talking about the “economy” or “multipurpose” bumper plates, sold at the best prices, either black or color-coded.

Several brands of bumper plates nowadays are guaranteed within 1% of the marked weight. Rubber is a bit more consistent than iron in the shape or density of the material the product, I guess.

Rogue Fitness and Vulcan Strength both guarantee their economy bumpers to be within 1%.

Competition bumper plates have a larger steel hub in the middle, taking up a good portion of the plate, with a few inches of rubber around the outside.

These are generally within 10 grams, including Rogue’s and Vulcan Strength‘s.

A lot of home users get these for lifting in their garage, not so much for the accuracy of the plates but because economy bumpers are so thick and you’re maxed out fitting about 405 lb on a bar. For experienced lifters, deadlifts are the lift that is first limited by this.

Other than that, they are the standard for IWF weightlifting competitions and the Crossfit Games.

Plates like Troy’s are not truly calibrated. They are often called that, but they’re actually just taking advantage of good processes in casting and milling to get a perfect size every time, translating to fairly accurate weight. The size of theirs is calibrated, while the weight just comes along for the ride to be pretty accurate too.

True calibrated plates, accurate within 10 grams, only come as solid steel plates (the above pic) or competition bumper plates (further above). Iron is just too unpredictable to get it right cost-effectively I think.

Steel powerlifting discs are very expensive! They are made for powerlifting competitions where accuracy is of utmost importance. Occasionally an OCD lifter buys some of them for non-competition use at home. 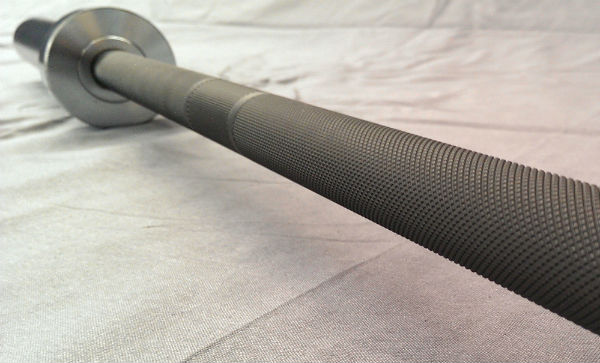 Barbells generally are pretty accurate. Even a $200 barbell should be really close to the intended weight, which is usually 45 lbs or 44 lbs / 20 kg.

So for dumbbells, you can make a pretty good guess on how accurate they are based on the material used.

“Hex” (6-sided) head dumbbells, with or without rubber coating, are usually not super accurate. Figure within 5%, much like olympic plates.

Nicer rubber dumbbells might be within 2%. These will have perhaps 8 or 12 sided heads, or round heads, with thicker steel handles (30-35mm) than the cheap ones.

Round-head urethane dumbbells, of the type you see in nice health clubs, are going to pretty much always be within 2%.

Rubber and urethane look similar, and you might not be able to tell the difference. One way to tell is only urethane dumbbells can have nicely detailed color logos on them. 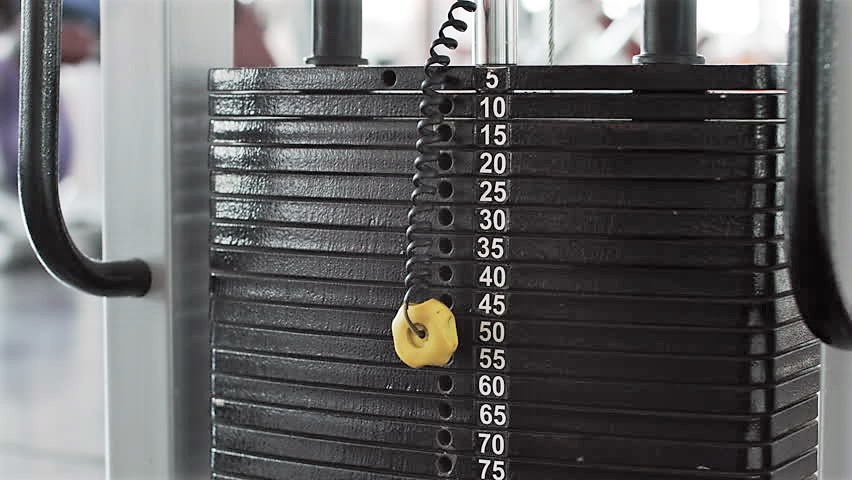 The rectangular weight plates in the machine’s spin-select weight stack are usually marked, but if you’re in a crappy gym or you picked up a cheap machine second hand, they’re probably 10lb or 5lb increments. Which one? Who knows.

Are those 10lb or 5lb plates accurate? Again, who knows.

Then the question becomes, How does that convert to a freeweight movement? Are you really lifting 100 lbs?

The answer is: The levers, pulleys, and friction make it so complicated that there’s no accurate way to tell in general.

People do heavy squats on a Smith machine, heavy bench presses on a leverage bench, and heavy lat pulldowns, and they’re surprised when they attempt barbell squats, barbell bench presses, and pull ups that their numbers are only about half to 2/3 of the “machine” weight they lifted.

Another reason for this, besides the mechanics of a machine or simply inaccurate weights, is the stabilizer muscles your body has to recruit to balance a heavy barbell, something it does not have to do with a machine. That’s why freeweights are far more useful for building muscle or strength when it comes to primary compound exercises like the squat and any presses.

David founded Adamant Barbell in 2007 and Two Rep Cave in 2018. Depending on his mood, he's into weight training, running, bodyweight exercises, and hitting the heavy bag.
Subscribe
6 Comments
Inline Feedbacks
View all comments

I don’t agree, except that I agree that there is no way to covert ALL machines the same way with the same converting factor. However, I have already proven that it can be done on a machine-by-machine basis, and if I can do this myself, the manufacturer certainly can. Let me repeat, each plate has a label, which is most likely the weight of the plate. All you have to do is correct the LABEL to show the correct resistance. Now, it can get complicated, and I don’t intend to go into all of the complications; for instance, let’s say that a 10-pund plate only comes out to 6.5 pounds of resistance on the user’s end. In other words, when the machine says you’re lifting 10 pounds, you’re only lifting 6.5 pounds Well, 6.5 is not a convenient figure to use, although it is HONEST, unlike the machine. Anyway, we want multiples of 5 or 10. One way to do this would be to make plates or weight slabs for that machine that give you you the correct rounded off numbers (10, 20, 20, etc). In other words, the plate would actually weigh, say, 15.7 pounds, but it would yield 10 pounds of RESISTANCE in the user’s hands. Thus, the labels would show the actual RESISTANCE.

I could say more, but I have already reached what I think is the permissible maxim for E-mail postings. I’ll just add that free weights may have some advantages, even though I think that their advocates greatly distort those advantages, but those advantages pale into insignificance if you don’t like and are unwilling to use free weights. To me, they’re very inconvenient and troublesome to use, so much so that I will continue refusing to use them unless and until I can find someone at the gym willing to change plates for a fee. Think about it, if you want to use 500 pounds on a leg press machine without weight stacks, you have to move twenty 25-pound plates to and from the machine. That’s just too damned much work for me, and I refuse to do it. Then, there is safety. It’s much easier to get injured while using free weights.

There is a solution, the only question is, why won’t the manufacturers do the right thing?

I should have also included friction and anything else that affects the final outcome. Users of weight stack machines shouldn’t have to be bothered with such things. All they want to know, all they need to know, is the actual resistance they experience. The labels on the machines should show this, not the weights of the plates. That may be of interest to some, but it’s the RESISTANCE for the end-user that’s important. I really get angry when I think of how proud I was at my “achievements” when I was naive enough to think that was really hoisting 300 pounds overhead. Sure, it would have been possible when I was younger, given enough time–I’m now 80–but I now know that those markings were just LIES. I wish I could sue for misrepresentation.

I hear people using machines frequently ask about what the numbers convert to for a freeweight barbell movement. It’s not really possible to convert them. With a barbell exercise, stabilizer muscles and balance are involved, turning it into a different movement. The same is true even for a pulling exercise, like a lat pulldown machine vs a pullup. People find that they can lat pull their bodyweight, as evidenced by the fact that they are lifted up off the floor, but they can’t do nearly as many pullups. The solution to all this is for most purposes you should be doing primarily barbell/freeweight exercises anyway.

No way to tell? Baloney. Here’s what I’ve said about the accuracy of the readings on weight stack machines.
Accuracy of weight measurement for weight machines
I’ve never used this site before, so I might be doing things wrong. I couldn’t figure out where or how to post my reply, so I deleted the question and typed in the blank space left. Here’s my reply. Coincidentally, I just typed it for another site, but I couldn’t send it for some reason. Here it is.

It’s my contention that M.A. has NOTHING to do with the unreliability/dishonesty of weight stack machines. Sure, we all know about levers, pulleys and such, but we should never even have to think about M.A. All we need is for the dial/meter/gauge, etc. to reflect the real resistance. Think about it. If you knew the actual resistance at a particular setting, you could simply scratch out the lie and write in the correct weight with fingernail polish. Agreed? Well, since this could obviously be easily done, it’s insulting to be told that the manufacturers couldn’t etch/paint/label the CORRECT numbers when their machines are made. Damn them. This really makes me angry.

Thanks for sharing your insight! I don’t know what M.A. is, but yes, it would be nice if the weights were the same from machine to machine.