So you want a good barbell, but you’re conflicted as to what type to get.

FYI: “barbell” and “bar” usually mean the exact same thing. Back in the ancient days, when you had only fixed-weight barbells with those round heads, they were barbells. Then came the adjustable ones, composed of the weights and the bar. So the bar sort of becomes a barbell when it’s loaded with weight, but really it’s often called a barbell whether it’s loaded or not. A barbell, after all, is more than just a steel bar shaft straight from the steel mill. It’s got shoulders, sleeves, bushings, knurling, etc.

In this article we’ll call them “power bars” and “weightlifting bars,” just to be consistent. In the next article, that might go out the window and I’ll choose some other designation that strikes my fancy.

Your best choice depends on the exercises it will be used for, and in what kind of environment.

Power Bars are meant for the “big 3” powerlifting lifts: back squat, bench press and deadlift. These lifts are what powerlifting competitions are all about. But over the years they have also been embraced as good lifts for pretty much anyone to do, over a wide range of goals and training styles, so power bars are what you’ll see at commercial gyms and lots of other places. There are also special extra-long deadlift bars that are a sub-class of powerlifting bars. 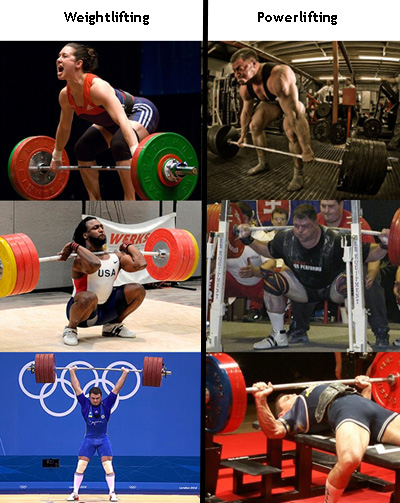 Weightlifting Bars used to be seen mainly in specialized olympic lifting gyms. No longer! When Crossfit got big, manufacturers started producing more of these for all the athletes who started learning that olympic lifts were the way to go. The olympic lifts are the snatch and the clean-and-jerk, both lifts ending with the bar held overhead. You’ve seen those lifts performed at the Olympic Games.

Economy Bars are the runts of the litter. They try to be like their big brothers, and they look a lot like them, but they can’t carry as much weight. They’re made cheaper and aren’t as nice to use.

Let’s Break it Down

But you want to know more. What is it about a power bar that makes it awesome for powerlifting but not so good for weightlifting? 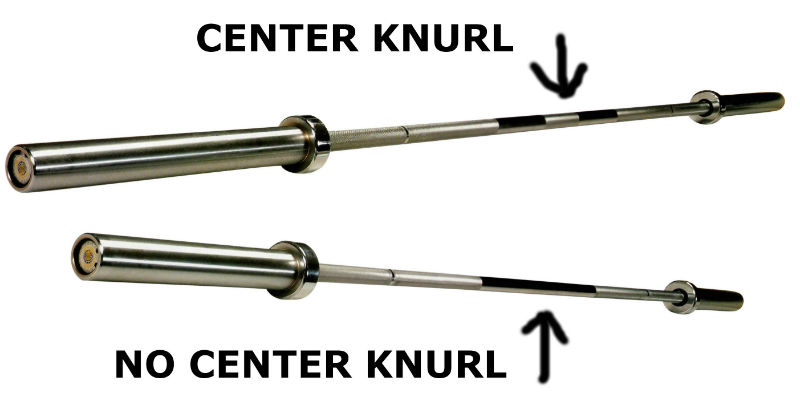 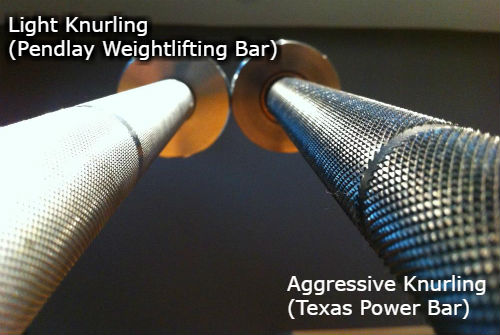 Knurling is the textured X-pattern pressed into the bar shaft. It gives you a better grip. All bars have knurling over most of the shaft.

Why don’t they just knurl the whole thing? A few reasons. The smooth spots in the middle give you good guides to center your hands from. Lifters doing cleans often prefer no center knurling so they won’t scratch the front of their neck up. Being conservative with the knurling keeps the knurling tool from wearing out so quickly and jacking up costs. All bars have a smooth section in the middle, with or without an ~8″ strip of knurling in the very center of that, which is what we call center knurling.

The ring spacing has to do with the IWF and IPF certification differences. For snatches the grip is pretty wide, so the wider markings helps. The IPF rules actually limit the grip width according to the 810mm spacing.

Then you’ve got the hybrid bars that are a mix between the two. And realistically, most mid-range bars are more or less hybrids.

York makes both weightlifting and power bars, but they all have center knurling because the IWF certification actually requires it even though it serves no purpose in olympic lifts anymore. Back in the day, when the one-handed snatch was a competition lift, you needed center knurling. That’s a pretty rare lift to be doing anymore with a barbell.

Some bars like CAP’s power bars have the power bar ring spacing and aggressive knurling, but the shaft thickness and no center knurling makes them also like weightlifting bars. So what do you call them? Don’t know. The lack of center knurling is a small cost-saving factor, and CAP’s bars have lower price points for comparable quality to other brands.

So for this reason, in our store we have cross-listed a number of bars in both the power bars and weightlifting bars categories.

So you’re still conflicted over which type of bar to get. I understand!

Here are my recommendations for bars that will work well for all-around use. Use them for cleans, squats, presses, anything you want.

See them here: The Best All-Purpose Bars, and if that’s too pricey for you, The Best Olympic Bar Under $200.

Not Satisfied? Pick the Right Power Bar or Weightlifting Bar

Do you want to avoid hybrid bars and their tradeoffs? Do you want to get more than one bar? Does your routine have exclusively powerlifting or weightlifting style exercises?

If so, you want to know what the best power bar or weightlifting bar is.

Here’s what you want. Check out these articles for handy charts that compare your options:

If you don’t feel satisfied with this article, EliteFTS also has a great article on how to pick the right bars for different purposes.