Eleiko has earned huge respect for making among the best bars in the weightlifting world. They are based in Sweden and have a USA division that they distribute from as well.

They are not cheap. If even $499 is out of your budget, we have an article comparing several WL bars under $300.

The problem is they have several models and their website does a lousy job of guiding you to the right bar. 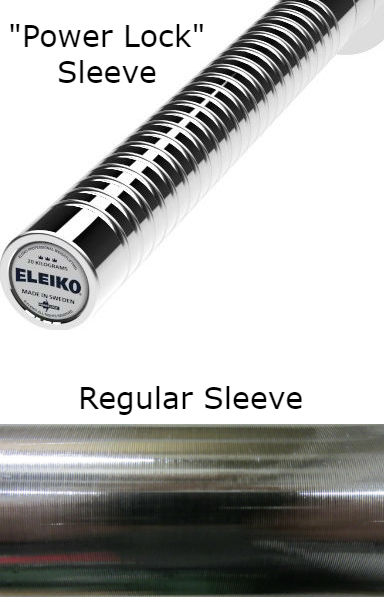 Eleiko also makes a couple powerlifting bars and lightweight bars. Those are whole different categories. I want to keep things focused here on the WL (weightlifting) bars. There’s enough to say about them alone.

For women’s bars, most of the same stuff throughout this article would apply. The women’s bars are made with a thinner 25mm shaft and shorter sleeves to hit the 15kg weight, and no center knurling. Otherwise, the rest applies to them too, including the 2018 upgrades.

The “Power Lock” bar is exactly the same as the other WL Training Bar except its sleeves have huge grooves in the old Russian WL bar style. Rogue started offering this too, with their new Russian Bar. It uses special collars, another $149. The advantage is it ensures the collars will never move through multiple drops. No more re-adjusting to make sure it’s tight. The downside is bumpers are harder to slide onto the bar smoothly. Not too bad though. The Russians don’t mind at all I guess.

These Eleiko bars all use the same steel, same 28mm shaft, same chrome plating, from the same batch. That is confirmed straight from Eleiko. The only differences in the shaft is how the knurling is cut. Any claims of one bar being stiffer than another or using different steel are not true for the current generation of bars. Anyone saying that is probably comparing an older generation bar. Eleiko frequently makes revisions.

Eleiko upgraded all their bars in 2018 to improve the sleeve sealing in order to keep out dust that could eventually interfere with the performance of the grease inside. They also improved the grease itself. The bearings are a better design to ensure durability.

Because of these upgrades, they were able to up the warranty for all bars, even the XF bar, to 12 years. (the XF bar was previously 30 days; nice jump!). The comp bar is still lifetime, of course.

Some of you will remember the “Sport Training Bar”. Eleiko ran a sale to liquidate it at the end of 2017. The new Performance Bar has pretty much the same specs, but for whatever reason they renamed it.

The other bars kept the same names but are now the “NxG” version.

The competition bar has the most aggressive knurling. To put it in context, it still isn’t as aggressive as the Rogue Ohio Power Bar, the classic Texas Power Bar, or the new Troy Texas Bar. For weightlifting movements your hands are sliding on it a lot more, and there’s a limit as to what you can take for even a few reps.

The XF bar is meant for athletes doing high-rep work such as in WODs, not 1RM attempts. These athletes need their palms to hold up and are ok with the bar not sticking to their palms so much.

All of our bars have the knurl pressed in in the same way with a sharp tool bit. The bit can do about 8 bars before it is too dull to do its job, at which point its tossed out. The first bar it makes has the sharpest knurl, the 8th bar has the least sharp. Generally the first two are comp bars, then WL Training, then ST, and the last 2 are XF. Since the process and tools are the same, the knurl is just more dull from bar to bar

These are the small 1/4″ smooth spots in the shaft’s knurling, a little wider than your shoulder width, that serve as finger guides. For consistency in hand placement, the IWF standard dictates that these marks are 910mm apart. IPF for powerlifting is 810mm. All Eleiko bars here hae IWF 910mm markings, and the XF bar has IPF as well, ie: dual markings. It just helps hand placement that much more. The XF bar is typically used by Crossfitters doing all sorts of exercises, not just olympic lifts, so the extra marks help.

Competition bars used for competitions should be calibrated to exacting dimensions and weight. The weight can be .05% . For IWF competitions this is a strict requirement. That’s one reason for the competition bar needing to be accurate down to the milligram and millimeter. The other bars might be off by a few ounces or even a pound. The Eleiko men’s bars are all supposed to be 20kg / 44lb (except one of the XF bars that is explicitly 45lb), but there are varying reports on the non-competition bar actual weight such as 20.4kg / 45lb, and I wouldn’t be surprised if there is an occasional bar that is elsewhere in that 43-45lb range.

The more bearings, the better, up to a point. Eleiko has settled on a maximum of 10. These are all needle bearings.

The importance of sensitive spin is for a few parts of the olympic lifts. When you’re doing the clean and are transitioning from the pull to the catch, your wrists have to rotate down under the bar without being tweaked. That’s the most severe spot, but to some extent this also applies to doing the jerk portion, and doing snatches as well. Powerlifters doing deadlifts, benches and squats don’t rotate the bar hardly at all and have no use for such a sensitive spin.

Old bars in the distant past actually used ball bearings instead of needle bearings, and you can find some around that still do. Ball bearings were more prone to being squished flat when the bar is slammed down on one end into a vertical bar storage rack. Even the smallest amount of deformation in the bearings would ruin the spin. Nowadays with needle bearings that doesn’t really happen.

Bar warranties are hard to rely on, but in some cases where you can prove you’re using an Eleiko platform and Eleiko bumpers, you could be eligible.

Coach Mark Rippetoe told of an experience he had where he called up Eleiko about a bent bar of theirs he had in the gym. Their response was that it could not be an Eleiko bar, because their bars are tested before they leave the factory and do not bend. The first mention I could find of him mentioning this was in 2008 on the Starting Strength forum, and I suspect this event happened back before there was such a thing as snapping a few photos on a phone and emailing them, or there would have been no arguing. I haven’t come across a similar story. It’s gotta be rare. Eleiko is frequently improving their bars, as mentioned above in the 2018 upgrade notes, and they are regarded as right up there with Uesaka, Werksan and others.

Bars flex, of course, especially weightlifting bars, but a permanent bend in Eleiko bars from being dropped on a platform is surely extremely rare. In any case, the warranty offered might affect the price a bit. If they figure 1 in every several thousand bars will need to be replaced, they figure that into their costs and adjust the price accordingly. So the lifetime or 12 year warranty gives you kind of an idea of how long they expect the bar to last without issues in the overwhelming majority of cases by that time.

Eleiko has had both their competition bar and training bar certified by the IWF (International Weightlifting Federation), basically the strictest (and most expensive) standard you can get for WL bars.

That means you can use the IWF training bar for any competitions, as it’s IWF certified.

Other Good Stuff to Know

Coach Charles Poliquin briefly goes over the difference between the powerlifting, weightlifting, women’s, and aluminum bars. In this video he doesn’t compare the competition, training, and sport bars, as they are all weightlifting bars, but he does note that you can kind of tell if the Eleiko bar in front of you is a powerlifting or weightlifting bar by kicking it in the middle as it sits on the floor. The weightlifting bar has more flex and will vibrate more.

Cooper from Garage Gym Reviews goes over an Eleiko bar in some detail, including the sleeves, knurling, and feel:

Some folks like to test spin a bar with an empty sleeve, no plates on it. Even good bearing bars like this don’t necessarily spin more than a few revolutions unloaded. Remember during use it’s the shaft that spins, not the sleeve, and it does so under load. Unloaded you can see how sensitive it is, ie: how easily it will rotate to a soft nudge. Then loaded you can see how smooth the rotation is.

One attribute of a really good bearing bar is a snug fit of the sleeves over the shaft, so that when you wiggle it, there’s no noise. Two benefits to that:

This video puts the Eleiko comp bar into context as compared to the Rogue Ohio Bar and Rogue 2.0.

Like a lot of bars nowadays, Eleiko puts tiny grooves on the sleeves that help keep plates and collars in place.

Get new Eleiko bars directly from Eleiko Sport USA (Chicago, IL). That’s pretty much your only choice. They don’t have dealers.

Rogue Fitness sometimes has used Eleiko bars at this link from the Crossfit Games and other events.

David founded Adamant Barbell in 2007 and Two Rep Cave in 2018. Depending on his mood, he's into weight training, running, bodyweight exercises, and hitting the heavy bag.
Subscribe
3 Comments
Inline Feedbacks
View all comments

Thank you! I will get this updated soon.

Vik, can you tell me where you got this? I don’t see anything about the number of bearings on Eleiko’s site anymore.