Editor’s Note: The Airdyne Pro and Airdyne AD7 are different names for the exact same bike. 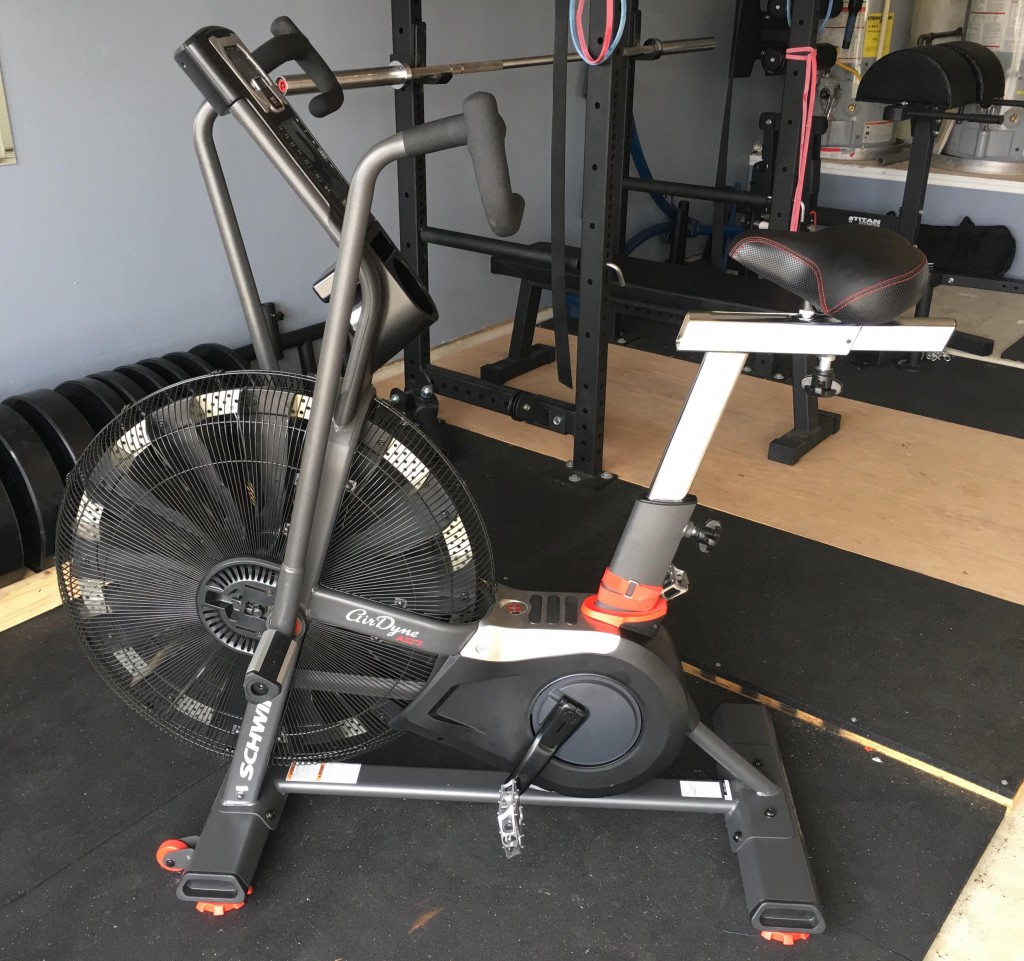 The Schwinn Airdyne Pro is one of the best fan bikes on the market. I use my Airdyne almost every day either as part of my warm up, cool down, or cardio (it can be used for both LISS and HIIT).

For those that don’t know, Schwinn has an entire lineup of fan bikes, ranging from cheaper economy models, the AD2 and AD6, to their most expensive bike, the AD7, also known as the Airdyne Pro.

There are also several other companies that make similar bikes to the Airdyne: the Rogue Echo Bike, Xebex Air Bike, Assault Airbike, and others. I have not used these other bikes, so this article will be strictly a review of the Airdyne Pro, as opposed to a comparison to other similar bikes.

About the bike and initial impressions

I received the bike in a single box, and some assembly was required. You have to install the handles, seat and seat post, crank arms, pedals, pegs, crossmembers, and monitor. It takes less than 30 minutes to have the entire bike assembled and ready to use. 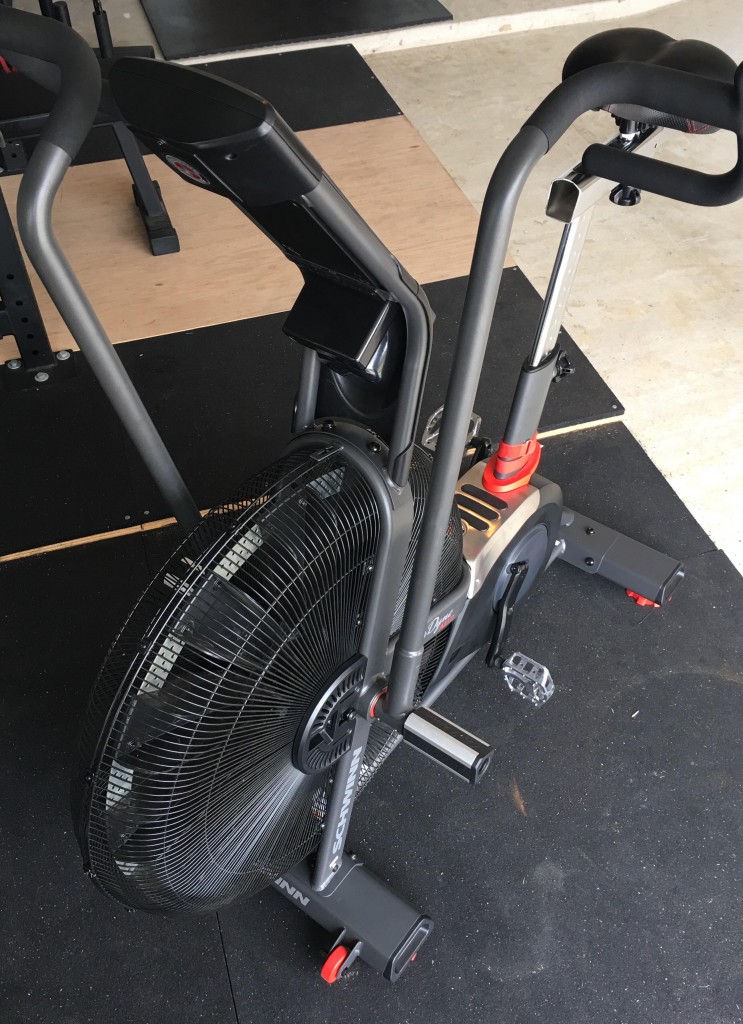 The Airdyne Pro is a belt driven bike, which is considered better than similar chain driven bikes. It requires less maintenance, is quieter, and much smoother. The Airdyne Pro is still not necessarily quiet though, when you get above 15-20 calories per minute, the sound is similar to a shop fan going at medium to high speed – and loud enough where it would be difficult to carry on a conversation or watch a TV unless the volume was quite high. The handles have a nice rubber coating that allows for multiple grips; you can even take an underhand grip with the lower handle and simulate a row. 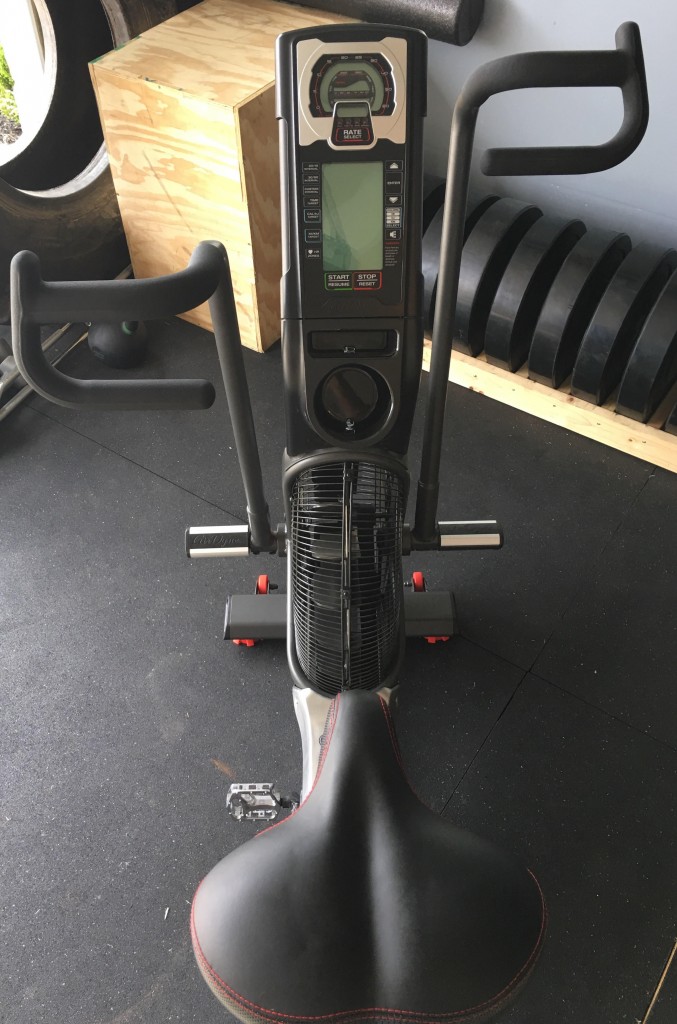 seat and monitor of the Schwinn Airdyne Pro

The quality of the parts used for the Airdyne Pro is apparent right out of the box. The frame and handles are a very nice powder coated steel, the drivetrain enclosure is a well-fitting plastic cover, and the seat is large and comfortable. The overall feel and appearance of the bike is that of commercial quality. There is no wobble at all when using the bike, even when you get off the seat and really pedal at full effort. After a full year of use, I still do not have a single loose part that causes any rattling or wobbling – and that is with no maintenance at all. 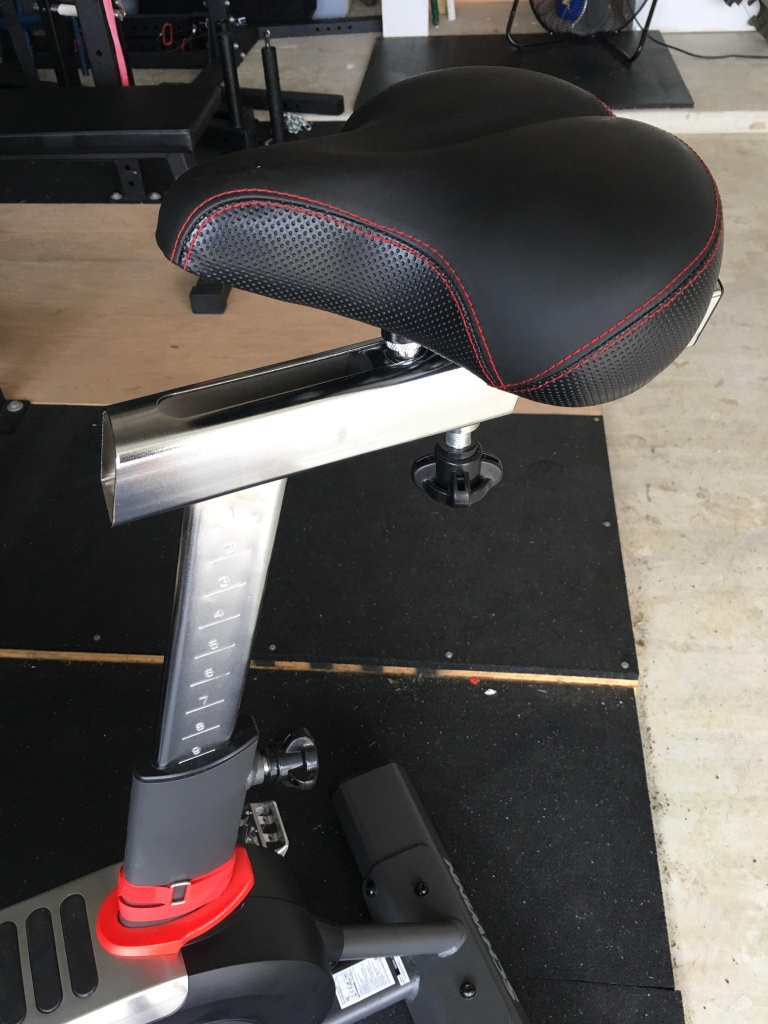 closer look at the seat with adjustment

I wanted to provide a list of some of the features, specs, and measurements that are not provided by Schwinn on their website. The footprint of the bike is approximately 21” wide by 43” long (closer to 52” long if you include the fan that sticks out the front of the bike).

The fan itself is larger than I initially expected, at 30” in diameter. Furthermore, the entire bike is quite large and overbuilt, but I think that is a good thing. 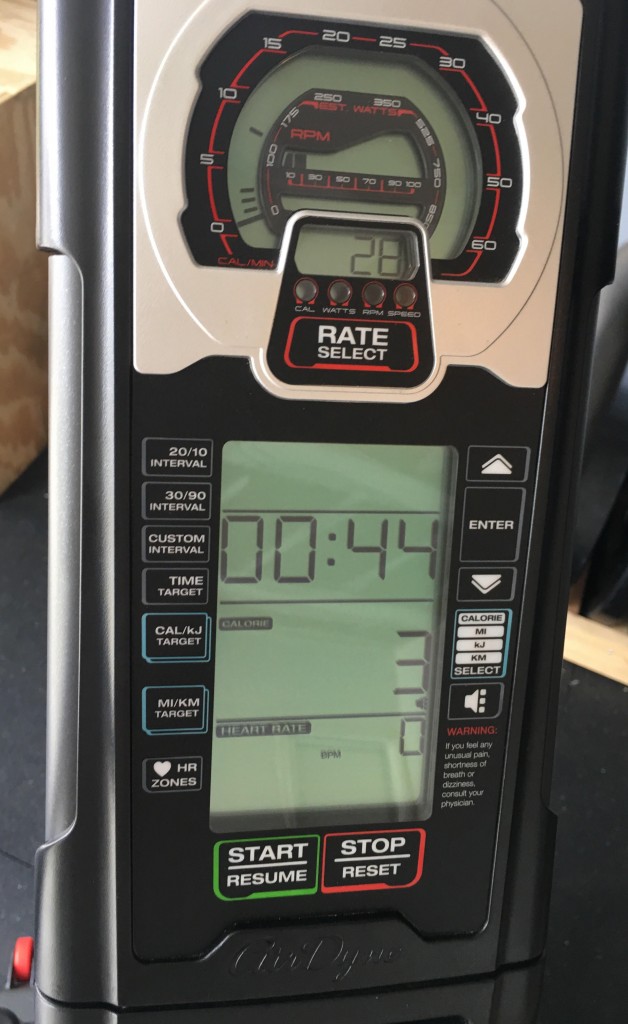 The Airdyne Pro has a great monitor, which makes it stand out from its competitors. The display screen is large and easy to read. I like the speedometer feature, which reads just like a car and outputs in calories/minute, estimated Watts, and RPM. The harder you pedal, the higher the speedometer goes. There is also a nice feature where it leaves a tick mark at your max output reached, so that you can see what your maximum effort was. You can also track your workout via time, distance, and speed, and you can even connect your heart rate as well. 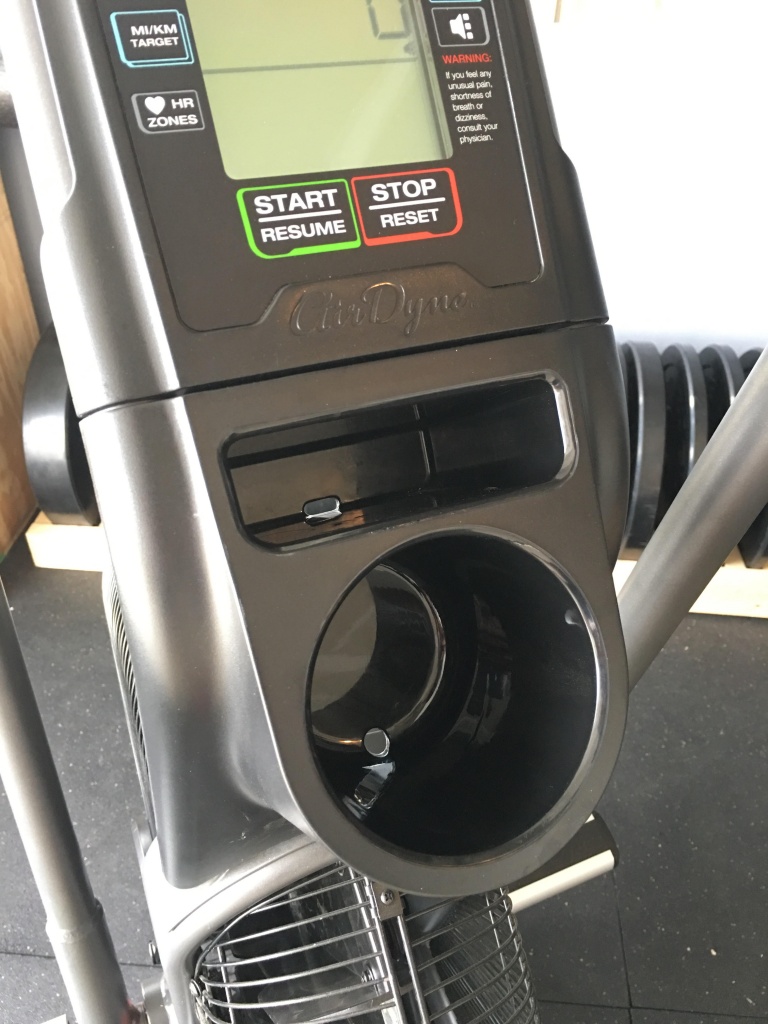 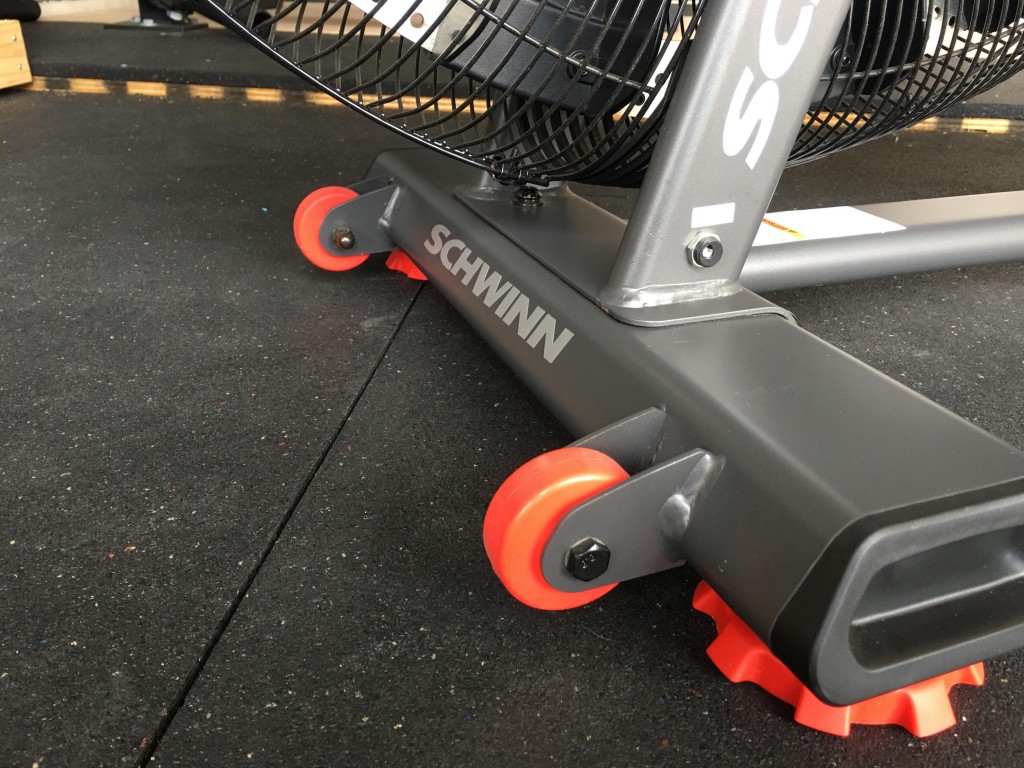 There are wheels on the front, which make it easy to move the bike simply by picking up the bike from the seat post and wheeling it to the desired location. This allows for the flexibility of storing the bike out of the way, then easily moving it to an open location for use. There is also a phone and water bottle holder, though, to be honest, the angle of the water bottle holder makes it almost non-usable.

As I said earlier, I use my Airdyne almost every day for warm up, cool down, or cardio. It is a very effective way to get both the upper and lower body engaged and to get the blood pumping.

As far as actually programming workouts for the Airdyne, I have done several variations. One that I really like is 12 calories, every minute on the minute, for 10-15 minutes. This is a good form of HIIT training when you really push the 12 calories as fast as you can. I have also done challenges like most calories in 2 minutes or 5 minutes. During the latter half of my workouts, during the assistance exercises and conditioning, I also sometimes do either 1 minute or 15 calories between each exercise instead of rest. This allows me to burn extra calories and build my work capacity. Some days I hop on the bike for 20 minutes of low intensity steady state cardio.

There are infinitely many other programs to run online that allow you to push yourself as hard as you want. The harder you push, the sooner you may realize why some nickname the Airdyne “The Devil’s Tricycle.”

I also want to point out how easy the Airdyne is to use. My wife and I can easily adjust the seat to accommodate either of us in a matter of seconds. When you want to use the bike, you can hop on and start pedaling, and press the Start button to begin the tracking of time and calories (or your preferred metric). To pause, you can press Stop, or you can press Stop twice to clear the data. While the bike does have several built-in features like preset intervals, as well as time, calorie, and mile targets, I prefer to use the simple and effective monitor to just hop on and go, tracking my calories and time intervals manually by using the running clock.

After a year of use, the Airdyne still performs the same as it does when I first received it. There is no slippage on the belt, all bolts are still tight, and the components I interact with most, such as the seat, handles, and pedals, have shown little no signs of wear and tear.

In conclusion, I would definitely recommend the Schwinn Airdyne Pro to anyone who is in the market for an airbike.

I have really nothing bad to say about the bike and I’m not sure there is anything I would change if given the opportunity. It is a versatile piece of cardio equipment that can be used year-round. It takes up very little space, is easy on the joints, and provides an excellent workout.

My one word of advice may be to either try to find one secondhand or wait until it goes on sale, which usually happens once or twice per year at various companies like Dick’s, Amazon, and Rogue. I was able to get mine for a price of about $700 shipped during the Dick’s Cyber Monday sale. I believe it is worth the full price tag of $1,000, but I would have a harder time justifying the extra $300.

Editor’s Note: You can get the Schwinn Airdyne Pro AD7 at Rogue Fitness or Amazon.

About the Author: Ryan Kenneth Bergsma

Hi, my name is Ryan and I am a husband, father, and hardware engineer in Austin, TX. I enjoy lifting weights in my garage gym, usually doing some type of powerlifting or strongman training. I also enjoy biking, kayaking, and hiking in the central Texas area.